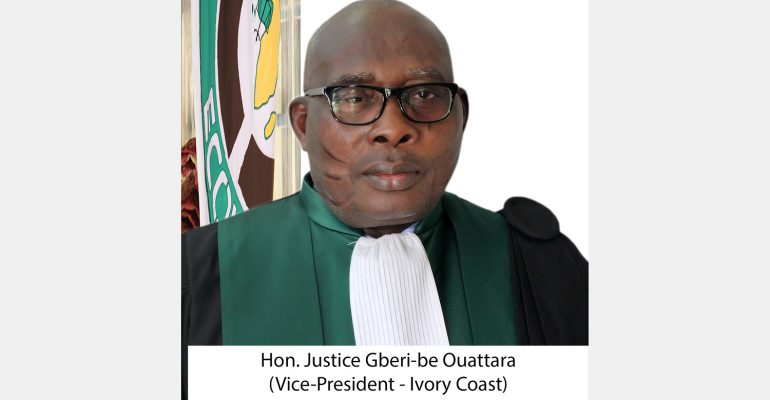 The Community Court of Justice, ECOWAS has dismissed a suit filed by a non-governmental organization (NGO) – Registered Trustees of Committee for Defence of Human Rights- challenging   the application and the proposal to admit the Kingdom of Morocco into the Economic Community of West African States (ECOWAS).

In its judgment read by the judge rapporteur, Honorable Justice Gberi-Be Ouattara, the Court declared the case inadmissible after finding the NGO incompetent to bring the matter before the Court in line with Article 10 (b) on access to the Court.

The Court stated three essential conditions for its admissibility namely: that an applicant justifies being a victim of the alleged violation, that the application must not be anonymous, and lastly, that the matter is not before another international court.

It observed that the NGO met two conditions but did not give proof of being a victim of the alleged human rights violation attributable to the two Respondents – ECOWAS Community and ECOWAS Commission- but rather based its submissions on allegations of incompetence of the Respondents to admit Morocco as a Member State of the 15-member ECOWAS.

Consequently, the Court dismissed the application of the NGO on the grounds that it lacked the legal capacity and interest to file such matter since it was neither part of a Member State, Council of Ministers nor ECOWAS Commission. The Court also ordered the NGO to bear the costs.

On jurisdiction, the Court held that it had competence to hear the matter considering that the NGO claimed the violation of its human rights which is one of its mandate areas but declared the matter inadmissible on the grounds that the NGO lacked the legal capacity and interest to file such matter bordering on the legality of an action in relation to the legal texts of the ECOWAS Community in line with Article 10 (b) of the 2005 Protocol relating to the Court.

In the initiating application with suit no ECW/CCJ/APP/30/18 filed on 26 July 2018, Mr Sola Egbeyinka, lawyer representing the NGO – Registered Trustees of Committee for Defence of Human Rights told the Court to hold both Respondents liable for the violation of the ECOWAS Treaty, the ECOWAS Protocol on Democracy and Good governance, the African Charter on Human and Peoples’ Rights and the Universal Declaration of Human Rights following an agreement in principle at the 55th ordinary summit of Heads of State and Government of ECOWAS  held in Liberia in 2016 acceding to Morocco’s request to be admitted into the Community.

The lawyer added that the summit had directed the second Respondent – ECOWAS Commission to examine the legal implication of Morocco’s accession as a Member State.

He told the Court that admitting Morocco to ECOWAS would be contrary to the aspirations and good intentions of the founding fathers of ECOWAS, and having examined the ECOWAS Revised Treaty and other relevant legal texts, Morocco was therefore not legally qualified to join the Community.

Furthermore, he said Morocco was geographically located in North Africa which is outside the West African region of ECOWAS Member States, and that there was no accession clause in the ECOWAS Treaty permitting Morocco or other African non Member States to be admitted as Member State of ECOWAS.

He also said the Kingdom of Morocco was a monarchy differentiating it from ECOWAS Member States governed by principles and ideologies of democracy as well as the promotion and protection of human rights within the region.

He added among others that admitting Morocco would expose the ECOWAS region to free circulation of persons and goods that would be detrimental to the objectives of the Community.

He asked the Court to declare the Respondents incompetent to authorize the admission of Morocco into ECOWAS and to stop them from permitting the accession, adding that it will result in the amendment of the ECOWAS Treaty and other ECOWAS legal texts annexed to it.

But the Respondents – ECOWAS, a regional organization comprising 15 Member States in West Africa, and ECOWAS Commission, its executive institution/arm charged with the harmonization and coordination of its regional integration programmes and activities, told the Court through its lawyer, Mr. Franck Ike Chude that geographical area was not a tangible limit to accession to a treaty.

He cited Article 2 of the ECOWAS Revised Treaty that states, “THE HIGH CONTRACTING PARTIES, by this Treaty, hereby re-affirm the establishment of the Economic Community of West African States (ECOWAS) and decide that It shall ultimately be the sole economic Community in the region for the purpose of economic integration and the realisation of the objectives of the African Economic Community.”

He also cited the example of Mauritania, which he said is geographically located outside the ECOWAS region but was a member of the ECOWAS Community till the year 2000 when it withdrew from the organization.

Moreover, he argued that some Member States of ECOWAS were at the inception of the Community not democracies but under military rule and that Article 7 of the ECOWAS Revised Treaty empowers the Conference of Heads of State and Government to take necessary measures for the progressive development of the Community and the realization of its objectives.

He asked the Court to declare the Respondents competent to admit Morocco in line with Articles 2 paragraph 2 and 3, and Article 7 paragraph 1 and 2 of the ECOWAS Revised Treaty of 1993.

The judgment was delivered during the ongoing external session of the Court in Abidjan, Cote d’Ivoire.