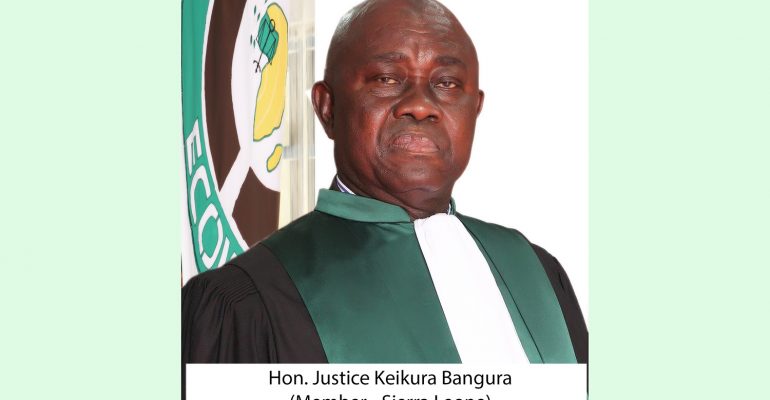 The ECOWAS Court of Justice has ordered the Republic of Nigeria to amend Section 24 of its Cybercrime (Prohibition, Prevention, etc) Act of 2015 in order to ensure conformity with the country’s obligations under the African Charter on Human and Peoples’ Rights (ACHPR) and the International Covenant on Civil and Political Rights (ICCPR).

Delivering judgement on Friday, 25th March 2022 during the Courts sitting in Accra in a case filed by the Registered Trustees of the Socio-Economic and Accountability Project (SERPA), a Non-Governmental Organisation, Justice Keikura Bangura who read the decision of the Court, said that the Section was not in conformity with Articles 9  of the ACHPR and 19 of the ICCPR to which the country is signatory.

SERAP filed the claim before the Court challenging the legality and compatibility of Section 24 of the Cybercrime Act 2005 in relation to the guarantees of freedom of expression and information enshrined in Article 9 of the ACHPR and Article 19 if the ICCPR, respectively.

It particularly alleged that the Section 24 violated the rights to freedom of expression, information and other rights of human rights defenders, activists, bloggers, journalists, broadcasters and social media users through the repressive use, interpretation and by agents of the Respondent, the same being vaguely worded and ambiguous.

The applicant contended that the since the passage of the Act, the Respondent and its agents have used the provisions of the act to harass, intimidate, arbitrarily arrest and detain and unfairly prosecute users of the social media, human rights defenders, activists, journalists, broadcasters and bloggers who express their views perceived to be critical of the Government both at the Federal and State levels.

The applicant listed twelve high profile cases of  the alleged victims of harassment, intimidation, arrest unlawful detention, prosecution and imprisonment of journalists, bloggers, broadcasters, social media users, human rights defenders and activists, by the Respondent, its agents and several states of Nigeria between August 2015 and November 2018, for alleged cyberstalking and urged the Court to make several declarations and orders that will underscore the incompatibility of the Act with the provisions of the two international instruments.

In its defence, the respondent urged the Court to dismiss the suit on the grounds that it was misplaced and unproved and the reliefs sought were not grantable in law.

In particular, the respondent contended that application was not only pending before the national court for the same reliefs but that the interpretation of Section 24 of the Act must be submitted to domestic courts and the ECOWAS Court as this is not within its competence as it concerns the interpretation of extant laws.

Moreover, the respondent contended that the Act was not only in line with Section 45 of the country’s 1999 Constitution, but was subjected to the requisite constitutional and legal processes before its passage which the applicant was aware of but did not protest its passage.

The respondent argued that the Act was not enacted to muzzle the freedom of expression in Nigeria but to curtail the activities of criminals carried out on the internet.

In deciding the case, the Court recalled that it had in a plethora of decided cases upheld that mere allegations of human rights violation is sufficient to invoke its human rights mandate pursuant to Article 9 (4) of the Supplementary Protocol as along as the two requirements of accessing the Court has been met ie that it was not anonymous and that the case was not before another international court.

The Court decided that proving a claim is imperative and that adducing a list without establishing by way of evidence, the violations suffered by those listed that resulted in breach of the Respondent’s obligations cannot procure a favorable judgment before this Court.

Furthermore, the Court stated that in the pursuit of proof, a claimant must support its claim with uncontroverted evidence which is of persuasive value to enable it discharge its burden of proof.

Similarly, the Court held that the assertion by the Applicant that several persons were prosecuted and convicted was not supported with evidence and therefore found the claims bereft of evidence of a summons or a judgment containing details of parties that will persuade it on the claim for prosecution.

Also on the panel of the Court in the suit were Justices Gberi-Be Ouattara and Dupe Atoki.