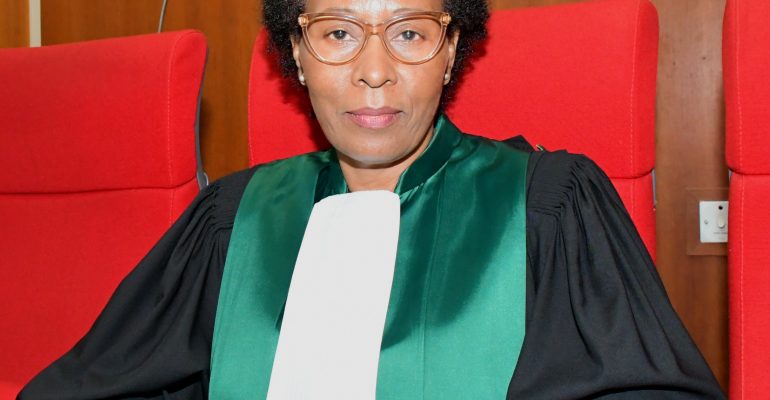 The ECOWAS Court of Justice has ordered the Republic of Togo to pay a symbolic 1 ( One CFA) as nominal reparation to a former Prime Minister, Mr. Gabriel Messan Agbeyome Kodjo, for his arbitrary arrest and detention by agents of the State from his house on 21st April 2020.

Delivering judgment during its ongoing external court session in Accra in a suit filed by Mr. Kodjo, who also served as various other capacities, including President of the National Assembly, the Court deemed the arrest and detention as arbitrary and unlawful under Articles 6 of the African Charter, 9 (2) of the International Covenant on Civil and Political Rights (ICCPR) and 9 of the Universal Declaration of Human Rights (UDHR).

In the judgement which was delivered by Justice Januaria Tavares Silva Moreira Costa, judge rapporteur, the Court also held the Defendant State in violation of the Applicant’s right to freedom of expression under Article 9 of the African Charter, Article 19 of the UDHR and Article 19 of the ICCPR.

Among the contention of the Applicant was that after the waiver of his immunity, criminal proceedings were brought against him, during which he was arbitrarily arrested, charged, and released under conditions or restrictions violating his human rights.

“Freedom of expression is a basic human right, vital to an individual’s personal development and political awareness, and to their participation in the conduct of their country’s public affairs (and) according to the African Charter, this right comprises the right to receive information and to express one’s opinion,” the Court explained.

The Court cited the provision of Article 9 of the African Charter relating to freedom of expression which contains a clause that refers the exercise of this right to the legal system of the States Parties by providing that the exercise of the right shall occur “in accordance with the law” which means that it is not absolute and up to Member States to define the conditions.

From the combined analysis of the provision of Article 27(2) of the Charter, the Court noted that the right to freedom of opinion and expression shall be exercised within the framework of the law and with due regard for the rights of others, collective security, morals, and the common interest.

The Court noted that while the Applicant was arrested for failing to comply with the summons to appear before the criminal investigating judge and released subject to certain conditions, denying such a personage the right to comment on the 22nd February 2020 elections was a way of gagging a politician thereby restricting his freedom of expression as guaranteed under Article 9(2) of the African Charter, Article 19 of the UDHR and Article 19 of the ICCPR.

On the issue of the lifting of the Applicant’s parliamentary immunity   which allowed for his arrest and detention, the Court noted after reviewing the relevant Articles of the Rules of Procedure of the country’s National Assembly and other instruments, that the waiver was submitted and obtained in accordance with the provisions of article 79 of the Rules of Procedure of the National Assembly of Togo.

Furthermore, it noted that the Assembly’s deliberation on the appropriateness of instituting proceedings against the Applicant is shown to be in conformity with article 11 of Organic Law No. 2007-13 of 19 June 2013, cited above and concluded that the process followed the steps required by law.

On the Applicant’s contention that his right to fair trial was violated, the Court acknowledged that Article 7 (1) (c) of the African Charter, and Article 14 (1) and (3) of the ICCPR refer to the right to a fair trial, which includes the right of defense, before the courts.

The Court also noted that the Applicant’s allegation that he was arrested at his home on 21 April 2020 and detained at the Criminal Intelligence and Investigation Service (SCRIC) premises, without being informed of the reasons for his arrest; that even during his hearing, which began at around 10am on 21 April 2020, it was at 15.15pm that the investigators notified him of the charges were not disputed by the Defendant.

It further noted that the  Applicant was not provided with any explanation as to the reasons for his arrest and that it was only after 6 hours, after the start of the hearing of the Applicant, that he was notified of the charges which was not justified by the Defendant.

After considering the circumstances of the arrest and trial, the Court found the Defendant violated the Applicant’s right to liberty and security guaranteed under Article 6 in line with the African Charter, Article 9, paragraph 2 of the ICCPR and Article 9 of the UDHR.

The Court noted that in this case, the Applicant invokes the violation of his human rights, namely, the right to a fair trial, the right to freedom of expression and the right to liberty and security, because, based on the request of the Prosecutor of the Republic and subsequently of the Attorney General of the Supreme Court of Togo alleging that the Applicant was seriously suspected of having committed criminal offences, the Speaker of the National Assembly of Togo, by resolution and minutes dated 16 March 2020, waived the immunity of the Applicant, as former Speaker of the National Assembly, in violation of his right of defense.

Furthermore,  the Applicant’s contended that when his immunity was waived, criminal proceedings were brought against him, during which he was arbitrarily arrested, charged, and released under conditions or restrictions violating his human rights.

The applicant therefore asked the court to declare that it has jurisdiction to examine the allegations of violations of his human rights and that his application is admissible.

On the merit of the case, the applicant asked the court to adjudge that the republic of Togo violated his rights as guaranteed by the provisions of art 7(1 ) of the African Charter on Human Rights (UDHR) and art 14 (1) (3) (b) of the international Covenant on Civil and Political Rights, through the Agency of the Special Commission of the National Assembly of Togo instituted on 10 March 2020.

He also urged the Court to hold the Republic of Togo in violation of his rights as guaranteed by the provision of art 9(2) of the African Charter on Human and People’s Rights and art 19 of the Universal Declaration of Human Rights, through the Agency of the Dean of investigating judges at the Court of First instance de premiere classe of Lome.

Furthermore, The applicant urged the court to adjudge that the Republic of Togo disregarded his rights as guaranteed by the provision of art (9) of the International Covenant on Civil and Political Rights, art (9) of the Universal Declaration of Human Rights and finally, art 6 of the African Charter on Human and Peoples ‘rights through the agency of the intelligence and Criminal investigations Department (SCRIC) of the national gendarmerie.

Consequently he asked the Court to order the Republic of Togo to immediately cease these violations by terminating the ongoing criminal inquiry against him, by virtue of the irregular procedure adopted to strip him of him parliamentary immunity.

Finally, he asked the court to order the defendant to repair the harm suffered by him as a result of the violations of his rights, by paying him a symbolic monetary compensation of one franc (CFA 1) in form of nominal damages.

The defendant on his part, requested the court to adjudge and declare that it is manifestly incompetent to adjudicate on the request relating to the termination of the criminal proceedings initiated against the applicant as this falls  exclusively within the jurisdiction of the Togo domestic courts;

He also asked the court that the applicant should bear the cost in line with art 66 of the Rules of procedure of the Court.

The Court also dismissed the rest of the Applicant’s claims.

Also on the panel in the suit were Justices, Dupe ATOKI, presiding judge and Bangura Keikura, member.