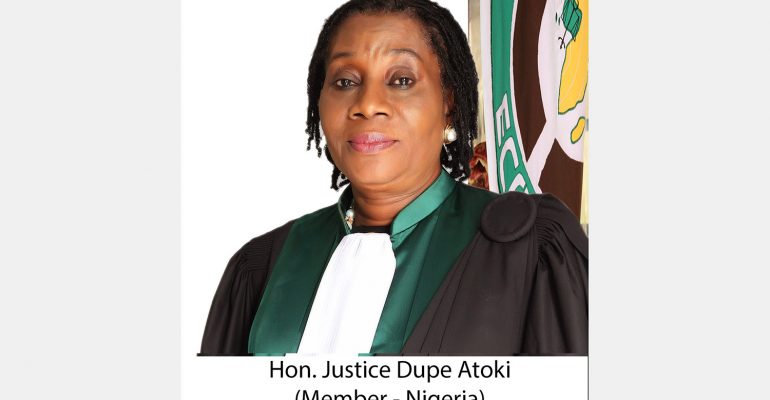 Hearing in a suit filed by a former Liberian President, Dr Charles G. Taylor, alleging the violation of his human rights over the payment of his pension and retirement benefits  was  on Wednesday, 25th May 2022 adjourned by the ECOWAS Court of Justice to enable the Counsel to the former President  file a response to the submissions of the government of Liberia.

The Presiding Judge, Justice Dupe Atoki announced the adjournment ‘ in the interest of justice,’ during Wednesday’s hearing despite the objection of the Counsel to the government, Mr. Lafayette Gould.

In the suit, the former President alleged that the “ refusal” of the Republic of Liberia to pay his pension and retirement benefits since ‘resigning from office on 11th August 2003’ constitute a violation of his human rights, particularly the right to freedom from discrimination, equal protection of the law, right to dignity, fair hearing and property as guaranteed under Article 2,3, 4, 7 and 14 of the African Charter on Human and Peoples’ Rights.

The Act, according to the suit, relates to the retirement pension of the President and Vice President of the Republic of Liberia, the Speaker and Deputy Speaker of the House of Representatives, the President Pro-Tempore of the Liberia Senate and Members of the Liberian Legislature, the Chief Justice and the Associate Justices of the Supreme Court of Liberia.

He referred to Sections 1 and 2 of the Act published on 26th November 2003, which provides that   a ‘former President who honorably retired to private life and who is not in any way gainfully employed by Government shall receive from Government a pension equal to fifty percent of the salary of the incumbent President.”

Moreover, he argued that  a former President is also expected to be provided with a personal staff and facilities for the remainder of his/her life in an amount that shall not be less that Twenty-Five thousand US dollars per annum.

The Act also provides that the surviving spouse of a Former President shall be entitled to receive annuity equal to Fifty percent of the pension received by the former President.

In addition, the surviving Spouse of the Former President shall be entitled to a personal staff and facilities for the remainder of her life. The amount allowed for this shall not be less than Twelve Thousand Five Hundred (12,500) United States Dollars. This allowance shall commence as of the date of the death of the Former President.

According to the Act, the pension provides for payments due to a surviving spouse to be paid on the death  in equal parts to each of his/her minor children of the deceased President.

In its reply, the Republic of Liberia said that Dr Taylor was not qualified to the entitlements provided for by the Act of 6 July 1978 as the « the Act qualifies in clear and unequivocal terms the mode and manner of a President’s retirement and his status after retirement in order for him or her to benefit under the provision of the Act ».

The Respondent said that Dr Charles Taylor did not retire honourably, as this would mean voluntarily quitting office, having reached a certain age but was under a criminal indictment by the special court of Sierra Leone.

The government further argued that considering the  political and military situation in the country at that time and in order to save  his life, the former President negotiated and accepted an arrangement under which he resigned and was exiled to Nigeria but was  arrested in 2006 while trying to flee Nigeria and ultimately sent to the Special court of Sierra Leone.

On 26 April 2012, the government said in its response, he was convicted for war crimes and crimes against humanity and sentenced to 50 years of imprisonment which he is currently serving in England.

The Respondent argued that the Applicant did not also retire to a private life as claimed as there is no provision for privacy in jail  and also questioned the possibility of a prisoner having aides.

The government insisted that the law only covered former presidents who retired honourably  and who reside in the country and therefore urged the Court to dismiss the claims by the former President as ‘factually and legally defective. It also requested the Court to declare the application inadmissible as the Act on which the Applicant based his claims does not apply to convicts and persons serving prison terms.