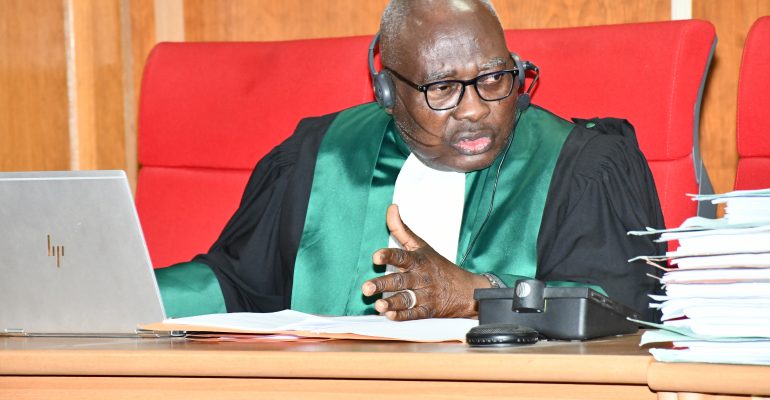 The ECOWAS Court has struck out a suit filed by former President Yayi Boni of Benin in which he accused agents of the Republic of Benin of torturing him and depriving him of his freedom while under house arrest.

When the case came up for judgment on Wednesday, 13th July 2022, the Judge Rapporteur announced that the Applicant had filed a written application to withdraw the case which was originally filed on 20th May 2019.

Justice Gberi-be Ouattara said the Court was ready to deliver the judgment but the request by the Applicant meant the case had to be struck out.

The Court directed the Applicant to bear the costs.

In suit No ECW/CCJ/APP/23/19, the Applicant alleged that the  country’s police and army surrounded his house with the aim of arresting him which was thwarted by the citizens who gathered to prevent them from effecting the arrest.

The Applicant averred that different incidents occurred, leading to deaths and serious injuries among the population of unarmed civilians.

Dr Boni contended that following various incidents that led to the massacre of citizens, security forces erected barricades in his neighborhood, refusing him access to his home, his parents, and political friends and even to his lawyer.

The Applicant said that the house arrest violated the conventions and international agreements ratified by Benin, mainly Articles 5 and 6 of the African Charter on Human and Peoples’ Rights (ACHPR); Article and 1 of the United Nations Convention against Torture; – Article 9 of the International Covenant on Civil and Political Rights and Articles 9 and 10 of the Universal Declaration of Human Rights (UDHR);

He had asked the Court to order the government to pay him the sum of one (1) billion (1,000,000,000) CFA francs as damages in compensation for the harm allegedly suffered.

In its defence, the Republic of Benin argued that it had not violated any of the Applicant’s rights and asked the Court to dismiss all the claims.

The Respondent explained that the pre-election period of the legislative election of April 2019 in Benin was characterized by threats and calls for violence from the opposition leaders, including the Applicant.

The Respondent added that during the electoral campaign, the Applicant and members of some opposition parties called for a revolt, declaring that there would be no elections without the opposition and calling for “resistance” against the government.

The Respondent asserted that on 30 April 2019, in an interview with the continental newspaper “Jeune Afrique”, the applicant threatened that the opposition will “make the country ungovernable”

The Respondent alleged that it was in this context that on the 1st May 2019, under the pretext that the police was preparing to question the applicant, some individuals took over the streets armed with all kinds of weapons  during which public and private property were attacked.

The Respondent said that the Police intervened to contain the thugs in accordance with its republican mission to restore public order and that roadblocks were erected around the Applicant’s domicile as part of the effort to contain the violence and were removed as soon as the situation improved.

The Respondent therefore urged the Court to consider the application pointless and inappropriate and to dismiss it.