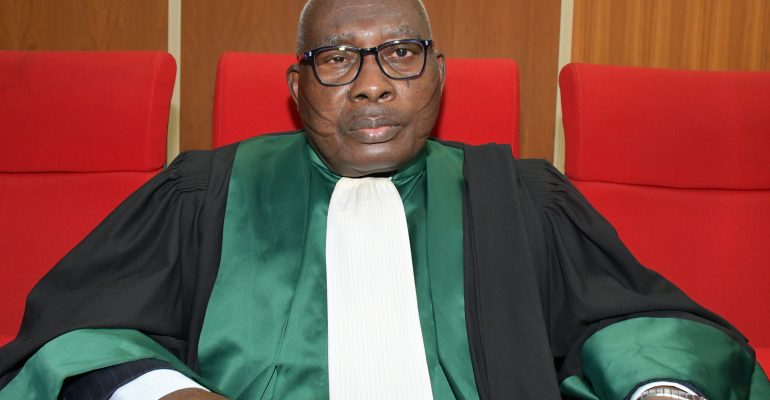 The ECOWAS Court of Justice has ruled that it has no jurisdiction to entertain a suit filed by an Ivorian lady asking the Court to hold the Republic of Cote d’Ivoire liable for the violation of Articles 284 and 285 of the country’s penal code in connection with the decision of  the country’s national court over a land dispute involving the Applicant.

Delivering judgement in the suit filed by Dame Thia Philomene, the Court noted that its jurisdiction in matters of human rights is governed by the provisions of Articles 9-4 of the Additional Protocol A/SP.1/01/05 of January 19, 2005 and the amendment to Protocol A/P.1/7/91 relating to the Court of Justice which provides that the “Court has jurisdiction to hear cases of violation of human rights in any Member State”.

In the judgment which was delivered by the Judge Rapporteur for the case, Justice Gberi-Be Quattara, the Court held that the matter did not qualify as a human rights violation even though it had affirmed severally that the allegations of violation of human rights in an Application are in themselves sufficient to establish its jurisdiction without prejudging the veracity of the alleged facts.In this case, the Court held that the applicant did not raise any violation of human rights or the disregard of a legal instrument relating to the protection of human rights in support of her application as the case submitted for its examination relates to the constitution, in particular the violation, according to the applicant, of Articles 284 and 285 of the Ivorian Criminal Code.

It observed further that “unlike other International Courts of Justice, such as the European Court of Human Rights, the ECOWAS Community Court of Justice does not have jurisdiction to re-evaluate decisions rendered by the national courts of the Member States” as it is not a Court of Appeal or a Court of Cassation vis-à-vis the national courts concluding that the applicant’s action cannot succeed.The Court ordered the Applicant to bear the costs.

Dame Philomena,  a trader  who was represented by her lawyer, Coulibally Soungalo, approached the Court alleging that her rights were violated by the decisions of the country’s courts which found her guilty of the facts of undue issuance of an administrative document and its use contrary to the provisions of the law, an action punishable by law.

The applicant criticized the Ivorian courts for having misdirected themselves in the various suits brought before them over the land dispute which constitute a violation of Articles 284 and 285 of the Ivorian criminal code. The Applicant had in seizing the ECOWAS Court, asked it to declare her innocent of the improper issuance of an administrative document and the use of such a document.

The case relates to a land dispute between Dame Philomène,  over a land she allegedly bought from  Azi Issa Fofana and Azi Vaman Fofana, both heirs to  their late mother, Fofana Kadidja,  the original owner of the plot. The Applicant said she was in the process of developing the plot when two others, Mr. Fofana Yaya and Fofana Salimata claimed the land as their property and approached an Ivorian court which challenged the administrative documents that gave her title to the land, having been notified earlier that the land was not the property of the seller.

Not satisfied with the decision of the correctional Court which questioned the authenticity of her documents, Counsel to the Applicant said his client approached the Court of Appeal which, in turn, confirmed the judgment of the correctional court.He said that it was against this judgment that Dame Philomène appealed to the Supreme Court, which unfortunately rejected the appeal against the decision of the Court of Appeal.

The Republic of Cote d’Ivoire, which was represented by Mr. FOFANA NA Mariam, denied the allegations of the applicant and told the Court that the matter was pending before the Supreme Courts, the only authority competent to assess the compliance of decisions rendered with the law. He therefore contended that this assessment does not fall within the domain of the ECOWAS Court.He pointed out that by seizing the Court, the applicant aims to discredit the State of Cote d’Ivoire and its judicial institutions, arguing that the applicant provided no evidence to support these allegations.

He urged the Court to reject the claims of the Applicant.On the panel of the Court for the case were Justices Gberi-bè Ouattara, President, Dupe Atoki, member and Keikura Bangura, member.