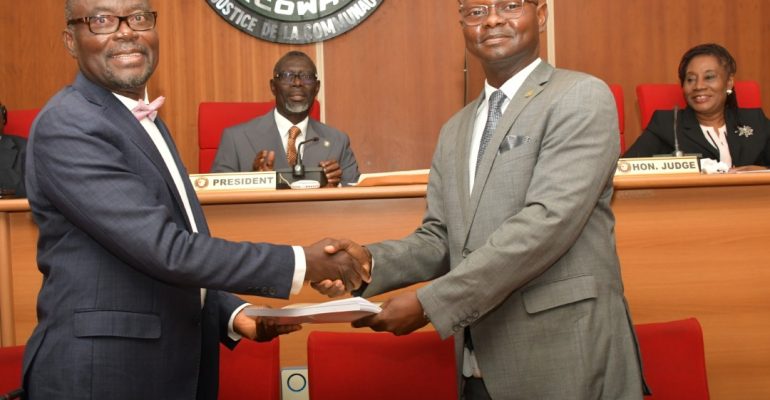 NEW CHIEF REGISTRAR OF THE COURT TAKES OVER

Dr Yaouza Ouro-Sama was on Wednesday, 12th October, 2022 sworn-in as the new Chief Registrar of the ECOWAS Court of Justice during a ceremony that was attended by Judges, Staff and a delegation from the ECOWAS Commission and held at the Court’s headquarters in Abuja.

“It is my conviction that the good work that the out-going chief registrar started will be continued and improved and we are confident that with a younger and vibrant Chief Registrar with diverse experience in law ably supported by his new assistants, the Court will achieve more, “the President said in his speech at the brief ceremony.

In his valedictory speech, the former Chief Registrar, Mr. Anene-Maidoh paid glowing tribute to the Judges and staff that have served the Court since its establishment about 20 years ago for the substantial progress recorded during the period which has elevated the Court to a global brand.  He listed the milestones recorded during the period to include the introduction of the electronic case management system which enables the virtual filing of cases and conduct of court sessions, both of which have contributed to improving access to the Court.

He also listed the setting up of an efficient Archive Unit as part of its achievements and suggested the early deployment of the external module/interface of the electronic case management system to enable lawyers and external stakeholders access the court, file their processes and follow procedures online.

He urged the management to consider the promotion of qualified   and deserving staff and an increase in the capacity of the language services unit for improved judicial services.

The former Chief Registrar used the opportunity to present a copy of the latest law report of the Court, the 2016 edition to the President of the Court and stressed the need to expedite the clearing of the backlog of the report in order to bring them up to date.

Mr Anene-Maidoh entreated the new chief registrar to advance the activities and programmes of the Court.

“As Chief Registrar, you are the institutional memory and will need to work very hard to make sure that memory is full and useful to the honourable judges and the staff,” he added.

During the ceremony, Justice Asante announced that the two new judges of the Court, who were sworn in last week in Bissau by the Chairman of the Authority of Heads of State and Government of ECOWAS, will assume duty on Thursday, 14th October 2022, adding that the relocation into the Court’s new premises will take place before the end of the year.

Earlier, Dr William Deiyah Towah, Director of Administration and Finance, described the ceremony as historic being the first handover ceremony of a Chief Registrar of the Court to a successor.

In his speech, Mr Ouro-Sama, the incoming chief registrar thanked  the management and staff of the court for the warmth with which he was received and assured the management of the Court of his readiness to work assiduously for the advancement of the Court and appealed to staff to extend the hands of collaboration to him for greater achievement as a team.

“I am joining with the passion to contribute to the development and evolution of the Court. Let us be united because together achieve a lot.”

Delivering the vote of thanks, the Vice President of the Court, Justice Gberi-Be Ouattara, described the oath taking aspect of the ceremony as a symbol of initiation into the family of the Court. He enjoined the new chief registrar to carry out his duties with respect and humility while maintaining his dignity.

He noted that the former Chief Registrar will remain an important resource for the Court because of his institutional memory and experience during his service to the Community.

Also in attendance at the ceremony were Honorable Justice Dupe Atoki (Member) and  Justices Keikura Bangura and Januaria Moreira Costa, who have just completed their four year tenure in the Court.

Also present were the Deputy Chief Registrar, Director of Research and Documentation, Director of Administration and Finance, and Heads of Divisions and Units and staff.

A delegation from the ECOWAS Commission comprising officials from the office of the Vice President, Audit, Human Resources and Communications Departments also witnessed the ceremony