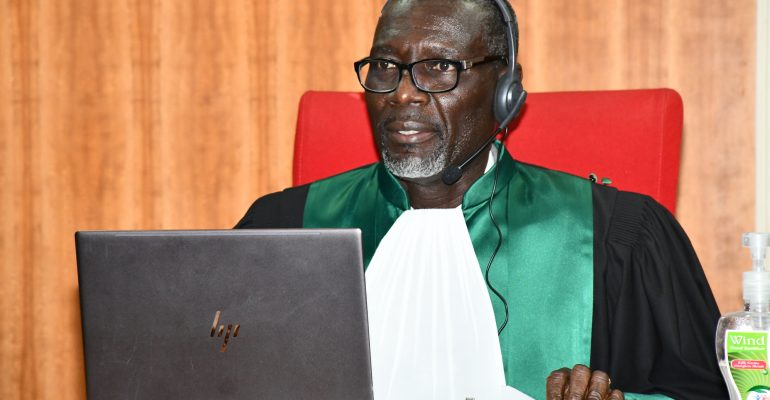 Judgement has been scheduled for 15th March 2023 by the ECOWAS Court of Justice in a case brought by a registered Non-Governmental Organisation (NGO) seeking an order of the Court to compel the Federal Republic of Nigeria to enact a comprehensive legislation on data protection in order to enforce their right to privacy and data protection.

In the suit, the Incorporated Trustees of Digital Rights Lawyers Initiative alleged that the Nigerian government has failed to comply with its international obligation to enact a comprehensive legislation that will domesticate the ECOWAS Supplementary Act A/Sa 1/01/10 on data protection within the ECOWAS region.

In suit no ECW/CCJ/APP/37/21, filed on 19th July 2021, lawyers representing the NGO, Mr Olumide Babalola and Mr Solomon Etisang, claimed that technological advancement and internet penetration/spread in Africa led ECOWAS to adopt the regional legal framework on data protection to safeguard and protect the citizen’s right to data privacy within the region.

They further claimed that many Member States of ECOWAS excluding Nigeria have enacted comprehensive national legislation/laws in accordance with the ECOWAS Supplementary Act adopted in 2010 and that this failure violated the rights of its citizens to data privacy.

Relying on various Articles of the ECOWAS Supplementary Act A/Sa 1/01/10 and other related legal texts including Article 17 of the International Covenant on Civil and Political Rights and Article 16 of the Convention on Rights of the Child, the lawyers told the Court that the Nigerian government only has a subsidiary legislation administered by one of its agencies which is not an independent organization/regulator as intended in the ECOWAS Supplementary Act on Personal Data Protection.

They also cited Article 16 of the ECOWAS Supplementary Act A/Sa 1/01/10 which states that “Membership of the data protection authority shall be incompatible with membership of government, the exercise of business executives, and ownership of shares in businesses in the information or telecommunications sectors.”

Subsequently, they asked the Court to declare the Nigerian government’s failure to enact a comprehensive legislation on data protection, a violation of their right to data privacy.

They also asked the Court for an order compelling the Nigerian government to pass a comprehensive legislation on data protection.

In its defense, the Nigerian government denied the allegations of the NGO, and enumerated various laws in force for the protection of data privacy in Nigeria.

Mrs Maimuna Lami Shiru, lawyer to the Respondent, also told the Court that the domestication of the provisions of the regional Act required a constitutional procedure in line with Section 12 of the Constitution of the Federal Republic of Nigeria. She described the ECOWAS Supplementary Act as a “cumbersome procedure which requires prudence on each member state to ensure that the legal framework for privacy of data does not prejudice the general interest of the state…”

Mrs Shiru also argued that the NGO lacked the capacity to initiate the case and therefore urged the Court to dismiss the suit for lack of merit, describing it as frivolous, vexatious, speculative and baseless.