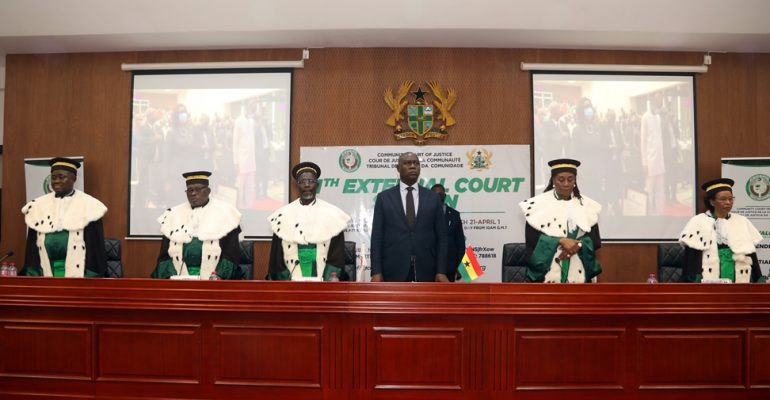 COURT PRESIDENT HAILS ACCRA EXTERNAL SESSION AS THE MOST SUCCESSFUL

The ECOWAS Court of Justice has indicated its preparedness to work with Member States and their judicial institutions to fashion out a ‘new approach to the enforcement of its decisions” in order to improve on the 30 per cent level of the implementation of its decisions.

“Our experience over the years suggest that the Court has to work with Member States to fashion out a new approach to the enforcement of its decisions because of the myriad of intervening issues,” the President of the Court, Justice Edward Amoako Asante said at a press conference to mark the end of the Court’s 11 external court session in Accra.

Article 24(3) of the Supplementary Protocol on the Court, requires each Member State to appoint a National Authority for the purpose of reception and processing of the execution of the decisions of the Court.

Resolving the vexed issue of the enforcement of the Court, the President added will require “close collaboration with national courts and institutions of Member States in order to fashion a workable formula that responds to the procedures of the Court and the States in order to allow the Court to continue to play its critical role in the ECOWAS integration project.’

Moreover, he pointed to the ECOWAS Revised Treaty which provides that judgments of the Court are binding on Member States, institutions of the Community, individuals and corporate bodies while the Supplementary Act on Sanctions against Member States that fail to honour their obligations to ECOWAS also has a similar provision.

He also spoke of the critical role of the press and civil society organisations  in mobilizing public support in Member States for the Court towards the resolution of this challenge. This he added, is in recognition of the Court’s important role in holding Member States accountable for their international obligations and the promotion of accountability and peace in the region through the exercise of its human rights mandate.

“Consequently, I wish to challenge the press to be in the vanguard for this campaign by seeing their presence here as a springboard for the beginning of a new relationship with the Court that should be sustained for the realization of our Community objectives, he added.

Justice Asante used the opportunity to express the gratitude of the Court to President Nana Addo Dankwa Akufo Addo,  of Ghana who also chairs the Authority of Heads of State and Government of ECOWAS for gracing the opening ceremony and contributing to the discussion on how to make the Court stronger by strengthening the overarching pillars of the laws governing the court and its operations.

In addition, he paid tribute to the host Judicial Service of Ghana,  particularly the Chief Justice for ensuring  the most successful and productive external court session of the Court during which 38 hearings were held and  20 judgments delivered.

The President also expressed the appreciation of the Court to the local and international press for the massive exposure enjoyed by the session and hoped that will constitute the springboard for deepening relations with the media.

He assured the media of the willingness of the Court to make the required contributions towards strengthening such a relationship that will improve the corps of journalists knowledgeable about the Court including a network of journalists on the Court.