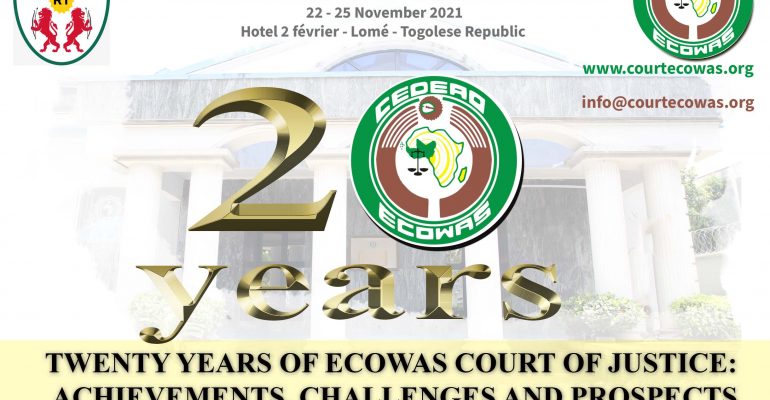 Some 24 papers will be presented by academics and lawyers from within and outside West Africa during a weeklong international conference which opens on Monday, 22nd November 2021 in Lome and organized by the ECOWAS Court of Justice and dedicated to its 20th anniversary.

The President of the Court, Honorable Justice Edward Amoako Asante said the conference, which is being held on the theme 20 years of the ECOWAS Court of Justice: achievements, challenges and prospects provides an opportunity to examine various dimensions of the young Court which has through its enviable jurisprudence, become an exemplar among regional courts, particularly in Africa.

“ Through the seven themes of the conference, we want not only to celebrate its remarkable achievements, but also examine the challenges and prospects, particularly against the backdrop of its initial mandate as an inter-state court  with responsibility to facilitate the region’s integration and its prominence as a human rights court,” the President said.

Honorable Justice Asante said the sub themes of the conference relate to the Court’s historical development, focusing on such issues as its defining human rights mandate, relations with national courts, the enforcement of its decisions, its jurisprudence, remedies and reparations as well as the mechanisms for strengthening the Court.

The periodic conference, the President said, was introduced in 2004 to provide an opportunity to review important legal themes that will contribute to the development of Community Law, review its judicial mandate and stay abreast of international best practices.

Moreover, Justice Asante said  the conference which had been held in Dakar, Cotonou, Accra, Bissau and Bamako, provides an opportunity to interface with selected stakeholders including judicial officers from Member States and regional courts as well scholars, jurists of international repute and the civil society.

He described the Lome conference as the first hybrid international conference of the Court where presentations will be made physically and virtually taking cognizance of the imperatives of the Covid-19 pandemic and the attendant savings.

The conference, which will be attended by the President of the ECOWAS Commission, the Speaker of the ECOWAS Parliament, the Chief Justices of ECOWAS Member States, Presidents of Bar Associations, Heads of ECOWAS National Units and the Director of the UNHCR for West and Central Africa, is expected to be declared open by President Faure Gnassingbe of the Republic of Togo.