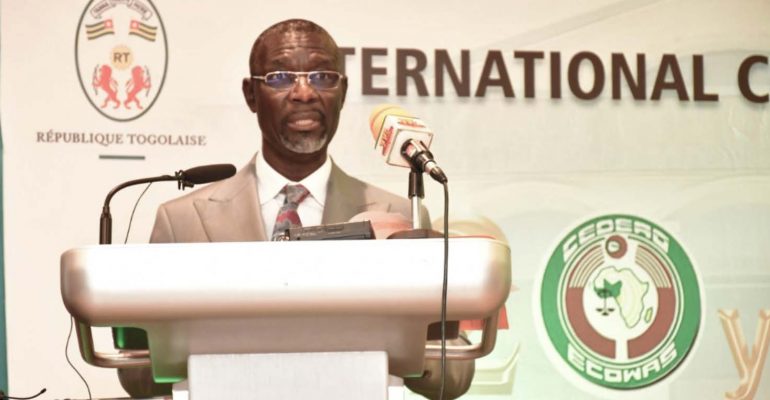 The President of the ECOWAS Court of Justice, Honorable Justice Edward Amoako Asante has proposed that non-state actors be granted access to the Court in respect of matters pertaining to West Africa’s economic integration agenda so that they can help refocus the Court on its primary mandate relating to the interpretation of Community texts and the facilitation of the region’s integration.

Delivering a speech in Lome at the opening of an international conference dedicated to the 20th anniversary of the Court, the President said by granting them access, non- state actors would also help in addressing the vexed issue of the ‘failure by Member States to honour their obligations to the Community.”

He recalled that by its initial Protocol as an interstate Court, it was charged with responsibility for facilitating the region’s integration, a responsibility that has been overshadowed by the preponderance of human rights cases following its 2005 Protocol that invested it with human rights jurisdiction.

Under the 1975 ECOWAS Treaty, the preamble of the initial Protocol on the Court provides that the essential role of the Court is to ensure the observance of law and justice in the interpretation and application of the Treaty and the Protocols and annexed Conventions.

It was also seized with responsibility for settling such disputes as may be referred to it in accordance with the provisions of the Treaty and disputes between States and the Institutions of the Community.

“We are proud to say that despite the indeterminate nature of the human rights mandate, the Court has fashioned out, a unique and vibrant human rights mechanism for our sub region,” the President said at the ceremony which was opened by Minister of Justice and Litigation of the Republic of Togo.

Moreover,  Justice Asante said the Court is “proud to note that due to its bold decisions on human rights complaints, the international Community has recognized the evolving ECOWAS human rights regime, its unique feature being the absence of a requirement for the exhaustion of local remedies.

“Community citizens therefore have the option of lodging complaints for human rights violations before their National Courts or the ECOWAS Court of Justice without the need to exhaust local remedies,” he noted.

He added: “We therefore wish to acknowledge with pride, the interest that has been shown in the jurisprudence of the ECOWAS Court of Justice by scholars and researchers from all over the world which had made the Court a source of pride to the Community.”

The President also challenged national courts of Member States to play their role in the integration process by making referrals to the ECOWAS Court of Justice in accordance with the protocol on the Court as it is only through this doctrine of preliminary ruling that the Court can effectively contribute to the development of ECOWAS Community Law.

He said that the theme of the celebration was chosen to celebrate the twenty years of existence of the Court, and to examine the achievements, challenges and future prospects of the Court.

“Without doubt, the Court is the pacesetter amongst regional Courts in Africa and we are proud of the achievements and the numerous landmark judgments that it has delivered,’ he noted.

He expressed concern about some of the challenges that constitute an existential threat to the Court and which when addressed, would brighten its future prospects, adding that the conference provides an opportunity for its  stakeholders and other collaborators the opportunity to evaluate the journey of the Court in the past twenty years, our achievements, challenges and prospects.

During its 20 years, the President said a total of 561 initiating applications have been lodged before the Court which has delivered 130 Rulings and 301 Judgments while 38 applications for revision of judgments  were registered while 24 revision decisions were delivered.

In addition, he said five advisory opinions were rendered while 1226 Court sessions were held during the period.

Justice Asante paid tribute to past and serving judges of the Court who have contributed to this impressive judicial record, adding that there are currently 166 cases pending before the Court. He also praised the founding fathers of ECOWAS particularly Gen. Yakubu Gowon of Nigeria and Late Gen. Gnasingbe Eyadema of Togo for their foresight in promoting the establishment of ECOWAS and the Republic of Togo for its contribution to the hosting of the Conference.

Some 24 papers are scheduled to be presented at the five day conference whose opening was attended by the President of the ECOWAS Commission, the Speaker of the ECOWAS Parliament, senior officials of the government of the Republic of Togo as well as academics and lawyers from across the region.