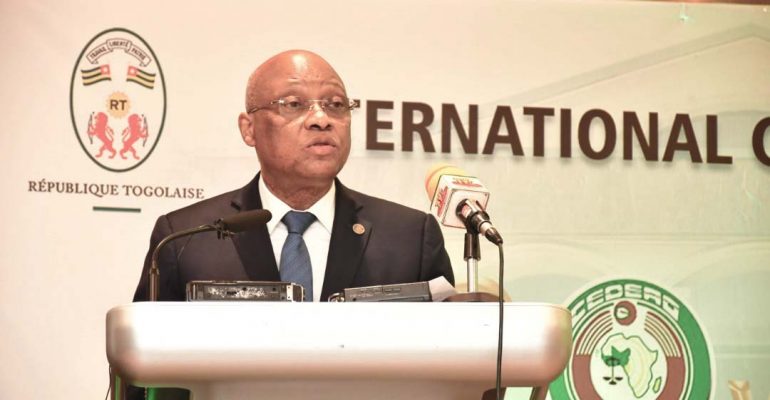 The President of the ECOWAS Commission, Mr Jean-Claude Kassi Brou has challenged the Community Court to strengthen and increase its role in promoting accessible, fair, transparent and credible social justice to enable it contribute to the realization of the aspirations of Community citizens for  good governance, the rule of law and fundamental freedoms.

In a speech at the opening of a five day international conference organized by the Court to mark its 20th anniversary in Lome, the President said that the  consultative process that preceded the development of the region’s 2050 draft vision showed the pervasive aspiration among community citizens for good governance, the rule of law and fundamental freedoms.

“ During the broad consultations that were conducted in the preparation of the of this vision, the deep aspirations of the ECOWAS populations were expressed ( and) one of the most frequently mentioned is the anchoring of good governance,  respect for the rule of law and the fundamental freedoms of citizens in our Community,” he added.

The President characterized these as shared  and universal values that can contribute to the development of the region and promote the culture of peace which are consistent with the 2063 agenda of the African Union  whose third aspiration is to build ‘an Africa of good governance, democracy, respect for human rights , justice and the rule of law.’

He said that the mission entrusted to the Court is essential to reassure Community citizens and give them confidence in the strengthening of the rule of law and respect for fundamental freedoms, adding that through the 2005 amendment of its Protocol, the Community not only strengthened access to the Court by citizens but also made strong provisions for the execution of its judgments.

He noted that the protection of human rights remains particularly fundamental and goes along with the promotion of the rule of law among litigants, especially women and the youth.

“ It goes without saying that the question of enforcement of the judgments of the Court in the Member States is still relevant,” adding that “ the aim is to improve interaction between the Community Court and the national courts of the Member States which remains one of the challenges to strengthening the relevance of the Community Court of Justice.”

“I remain convinced that the recommendations that will emanate from this meeting will make it possible to consolidate the dispensation of Law in our Region for a fairer, more equitable and better integrated Community, a condition to ensure peace, stability and prosperity,’ he added

Some 24 papers are scheduled to be presented during the five day conference on various aspects of the Court.