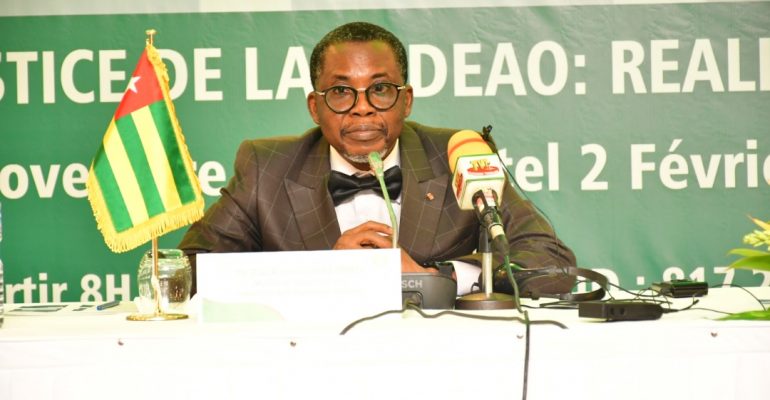 President Faure Gnassingbé of the Republic of Togo has enjoined the ECOWAS Court of Justice to look beyond its present challenges and take ‘measured , wise and lucid projection of its future’ in order to sustain its relevance in West Africa’s integration and the protection of the human rights of Community citizens.

In a speech to the opening of an international conference organized by the Court to mark its 20th anniversary, the President spoke of the role of the Court in promotion of social harmony and peace for sustainable development of West Africa and the benefit of the citizens of the Community.

“The Court must meet the expectation and aspirations of the citizens of Member States, ‘ the President said in the speech which as delivered by the Minister of Justice and Legislation, Mr Pius Kodjoui.

He charged the participants at the five day conference to engage in fruitful discussions resulting in desired outcomes and characterized the performance of the Court as ranking among top regional and international courts for the benefit of member states and citizens.

In the keynote address of the conference, Prof Muhammed Ladan, Director General of the Nigerian Institute of Advanced Legal Studies described the court as the principal legal organ of ECOWAS that can hold member states and institutions accountable.

He added that the ECOWAS Treaty adopted by Member States created the ECOWAS Court as one of its core institutions empowered to function as a community court, a human rights court, an administrative court and an arbitration tribunal.

He noted that though the court has fairly discharged its obligations, four main challenges have limited the court’s effectiveness.

These include its underutilization during its first five years when it was operating under Article 9 of its 1991 protocol that limited access to the court mainly to Member States and institutions, adding that the Court gained lost grounds with the adoption of its 2005 protocol that expanded its areas of competence.

Secondly,  he cited the lack of political will or failure by Member States to implement the decisions of the Court exemplified by the failure of some Member States to appoint their competent national authority for the implementation of the court’s decisions.

In addition, he mentioned the slow pace of national courts of Member States to make referrals to the ECOWAS Court for the interpretation of Community instruments which cumulatively have affected the effectiveness of the Court notably in  in its original mandate relating to the economic integration matters such as trade and immigration.

Thirdly, he spoke of the unwillingness of Member States and the ECOWAS to trigger cases related to trade and commerce which are relevant to the economic integration of the region, adding that the competence of the court as an arbitration tribunal has also not been exploited for the benefit of the region.

Lastly, he bemoaned the reduction of judges of the court from seven to five, the limitation of tenure of judges to four years non-renewable and non-staggered as well as the understaffing of translation services unit all of which are threatening the operational efficiency of the court.

Nevertheless, he commended the remarkable achievements of the court in the exercise of its human rights mandate and its impressive scorecard despite the challenges.

Some 24 papers are scheduled for presentation during the conference, the first hybrid conference of the court since 2005 when it was introduced as a forum to discuss various issues that will enhance its effectiveness.

The conference is being held under the theme Twenty years of ECOWAS Court of Justice: achievements, challenges and prospects and under seven sub themes