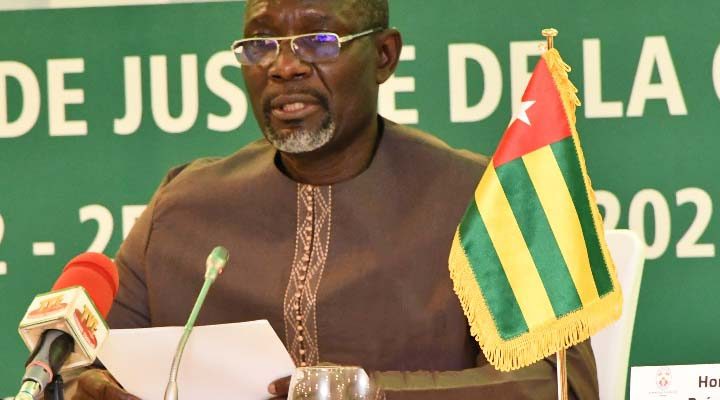 The ECOWAS Court of Justice has called for a well-defined relationship and firm collaboration with national courts in order to achieve the required synergy for the attainment of the region’s integration objectives including the development of Community laws.

“We must also work towards harmonizing our judicial and legal systems with the aim of creating the enabling legal environment for the attainment of our community objectives as provided for by the Revised Treaty”, the President of the Court, Honorable Justice Edward Amoako Asante said in his closing remarks at the end of the international conference of the Court in Lome.

In the speech on Thursday, 25th November 2021, Justice Asante said such synergy will create the necessary legal platform for the development of ECOWAS Community Laws for the benefit of the region as well as contribute to an improvement in the implementation of the decisions of the regional which presently stands at 33 per cent.

He also urged Member states to domesticate the ECOWAS Revised Treaty and Protocols on the Court as these impact on the application of Acts of the Community, the enforcement of the judgments of the Court and referrals from the national courts of Member States which is critical to the development of Community laws.

He added: “We must also recognize that ECOWAS is a supra national organization and by agreeing to form ECOWAS, the Member States have implicitly  ceded part of their sovereignty to ECOWAS to act on their behalf in areas of their common interest ( and ) It is therefore in our collective interest, for Member States to fulfill their Treaty obligations to ECOWAS.”

While the president acknowledged that 20 years is s short time in the life of an institution, he said that the Court is justifiably proud that it has taken ‘giant strides in the twenty years of its existence during which, apart from consolidating its institutional framework, has effectively discharged its judicial functions as manifested in the impressive number of its decisions and enviable jurisprudence.’

The President expressed optimism that the recommendations of the five day conference, which examined the 20 years of the Court under seven sub themes, would be implemented for the collective benefit of the citizens and the Community.

“By your various contributions, you have definitely expanded the frontiers of knowledge in the various thematic areas covered by the conference,” he said, adding “It was therefore fitting that we all gathered here to mark the twenty years’ anniversary of the Court, by participating in this international conference.”

Justice Asante paid tribute to His Excellency, President Faure Essozimna Gnassingbe of Togo who was represented by the Minister of Justice and Legislation, Mr. Pius Agbetomey at the opening ceremony of the conference as well as the Minister of Foreign Affairs and Diaspora, the Chief Justice of Togo and other high government officials of the country for the warm reception and support accorded the Court’s delegation and the participants at the conference.

The Vice President of the Court, Justice Gberi-Be Ouattara, had spoken in the same vein in delivering his vote of thanks when he extended the gratitude of the Court to the participants for their excellent presentations and insightful discussions that culminated in remarkable recommendations.

He also thanked the stakeholders and staff of the Court for their contributions which facilitated the successful conduct of the first hybrid international conference of the Court during which some key presenters participated virtually.

The theme of the conference was Twenty Years of ECOWAS Court of Justice; Achievements, Challenges and Prospects.