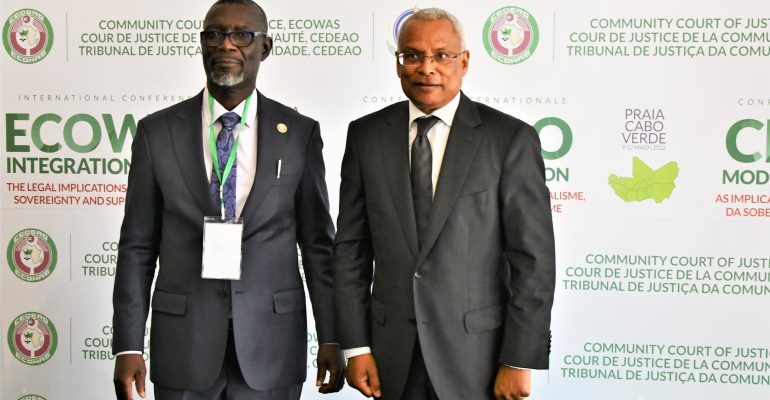 President José Maria Neves of Cape Verde has challenged the 15 member ECOWAS Community to take creative steps towards addressing the peculiar challenges restraining the region from actualizing its principal objective of integration just like other Regional Economic Communities (REC’s).

In a speech at the opening of the 2022 international conference of the ECOWAS Court of Justice on Monday, 9th May 2022 in Praia, the President said the promotion and consolidation of democratic systems of government, tolerance and respect for human rights as well as the elimination of all types of discrimination are the primary issues that should concern the 47 year old Community, including the Court.

He acknowledged the enormous importance of the Court in the protection of human rights within the Community but stressed the need for the creation of a legal framework that will ensures the principle of complementarity between the ECOWAS Court and National Courts.

President Neves underlined the importance of regional integration to his country which has influenced its internal and external policies but noted that as the only insular state in the region with the smallest population and land area and limited natural resources, the country is extremely vulnerable and sensitive to external shocks, especially in the economic-financial domain as well as climate and environmental issues.

Such conditions, he emphasized, makes it imperative to work towards full regional but with the National interest of the country accommodated and protected.

President Neves added that this should be the basis for building strategic dialogues and partnerships with the country taking cognizance of its position in the Atlantic as a corridor for peace, security and development.

The President also spoke of the effect of recent global events which has added to the complexity of the international environment and urged ECOWAS to provide the inspiration for the adoption of dialogue and negotiation towards the resolution of misunderstandings, differences and disputes.

In remarks earlier, the country’s Chief Justice, Justice Benfeito Mosso Ramos, described the conference as historic, being the first time the ECOWAS Court has hosted such a large forum in the country that attracted about 150 participants drawn from the region’s academia, jurists and lawyers.

He described it as an opportunity to reflect on the best model of regional integration while sharing knowledge that contributes to improving the lives of ECOWAS citizens.

Justice Ramos, who was a Judge at the ECOWAS court for five years and also served as its Vice President, acknowledged that the experience enriched him as a jurist and broadened his horizon in the field of international law.

He noted that the Court has delivered landmark decisions which underscored its importance to the Community such that ECOWAS can no longer be contemplated without the Court.

Earlier, the country’s Minister of Justice, Dr. Joana Rosa, said that in hosting the conference, Cape Verde has further demonstrated its commitment to deepen its integration into ECOWAS.

As a full member of ECOWAS since its creation in 1976, the Minister acknowledged that the country’s true integration into the region has not always been satisfactory and more efforts need to be made to ensure the profitable integration of Cape Verde with the other countries of the Community.

She maintained that Cape Verde desired regional integration which should take into consideration the country’s territorial, demographic, economic, and cultural specificities.

Dr Rosa said the conference provided an opportunity to discuss the model of integration that best suits the region against the background of its political history and legal diversities.

Participants at the four-day hybrid conference are discussing the ECOWAS Integration Model: The Legal Implications of Regionalism, Sovereignty and Supra-nationalism, the theme of the conference under seven sub themes that will examine the various dimensions of the region’s integration.