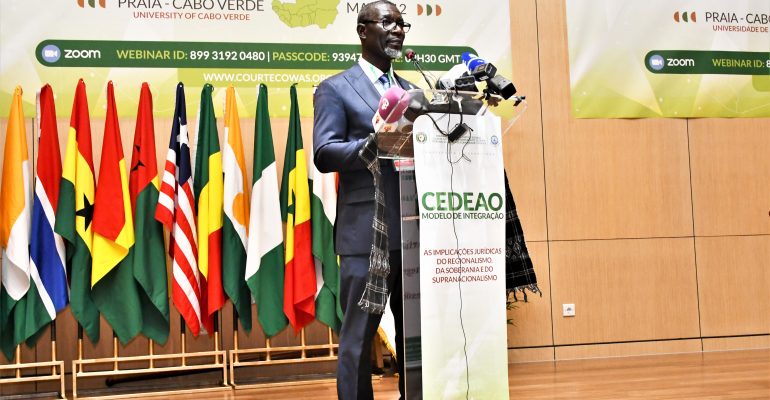 The President of the ECOWAS Court of Justice, Justice Edward Amoako Asante has spoken of ‘gaps’ in the legal framework of the ECOWAS integration project that need to be strengthened in order to align the Community’s objectives with the requisite legal architecture necessary for the attainments of its objectives.

“ The European Union remains the model for regional economic integration and we may do well to learn from the established legal framework of the European integration project,” the President said on Monday 9th May 2022 while opening the four day international conference of the Court in Praia, Cape Verde.

Justice Asante said that since the formation of any Regional Economic Community (REC) is Treaty based, it was important to provide the enabling legal environment, reinforced by an identifiable Community legal order, that facilitates the attainment of the Community objectives.

This, he added, should be supplemented with a strong and independent Regional Court with Treaty supervision and oversight functions to facilitate the integration project,  noting that the conference will provide the participants with the opportunity to review the legal relationship between regional economic integration and regional protection of human rights, which has become the Court’s defining mandate.

In choosing the ECOWAS Integration Model: The Legal Implications of Regionalism, Sovereignty and Supra-nationalism as the theme of the conference, the President said the intention is to focus attention on the essential ingredients for a regional integration arrangement, particularly the ECOWAS model that takes cognizance of the identified issues.

The President pointed out that the themes and sub themes are not only linked to the regional economic integration objectives of the community and the legal framework for the achievement of the Community objectives but also relevant to the mandates of the various ECOWAS Institutions.

He said the array of highly distinguished panelists, consisting of legal experts, jurists and professors of law involved in the conference were carefully chosen because of their expertise and wealth of experience.

Justice Asante explained that in recognition of the importance of the political will of Member States to the achievement of Community objectives, representatives of Member States have been invited along with the Chief Justices of some Member States and other stakeholders.

He also highlighted the challenges confronting the Court to include the 2018 reduction in the number and tenure of the Judges despite its burgeoning case burden as well as the absence of a functional Community Legal Order that defines the legal relationship between the Member States and the ECOWAS Institutions as well as between the ECOWAS Court of Justice and the national courts of Member States.

He paid tribute to the Sweden-based Raoul Wallenberg Institute of Human Rights and Humanitarian Law (RWI), for collaborating with the Court in hosting the conference.

In his speech, the President of the ECOWAS Bank for Investment and Development (EBID), Dr George Agyekum Donkor expressed concern about the ‘historical’ difficulty experienced by the bank in enforcing judgments against its debtors operating in multiple jurisdictions.

“ This is further compounded by the unwillingness of some local authorities  to apply principles espoused by the Community Court of Justice, “ the President of the Lome-based bank said, noting that the gaps in the general legal infrastructure adversely impacted the region’s ability to attract investment although it had sought to explore the existing legal framework.

He added: “ The legal framework rests at the core of business risk calculations making it a key factor in the success of business initiatives and in the long term, economic growth and it is imperative that we develop solutions to the issues that plague it.”

The EBID Chief Executive stressed that the region’s economic integration will not be successful  unless measures are implemented to give companies, especially Small and Medium Enterprises (SME’s), “ a modicum of predictability and certainty in entering international transactions that could be factored into costs and reflected in pricing.”

He therefore urged all stakeholders to consider three issues mainly framing treaties and existing protocols to fast track integration; championing initiatives  that incentivize countries to refer cases to the Court especially those involving international plaintiffs and to concretise efforts to equip local courts to enforce judgments of the Court through legislations in the various jurisdictions.

Some 150 participants mainly members of the academia, jurists and lawyers as well as representatives of ECOWAS Member States, are participating the conference.