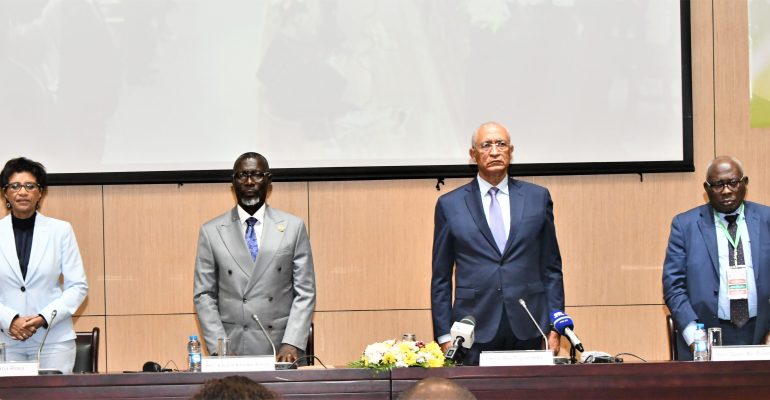 Participants at a conference organised by the Community Court of Justice to examine the ECOWAS model of integration have urged the Community to establish a mechanism for monitoring the implementation of Community Laws and strengthen its regulatory functions and commonality in order to achieve the higher degree of supranationalism necessary for the full integration of the region.

In wide ranging recommendations at the end of the four-day conference in Praia, the participants noted that deadlines are hardly met by the Community, thereby making the integration process and expectations cumbersome. They therefore recommended the establishment of a monitoring and evaluation mechanism for the continuous appraisal of the preparedness of each Member State towards targets set with a view to assisting those not committed or making good progress to meet the targets.

In addition, they challenged Member States and ECOWAS to create the opportunity for the  region’s citizens to play a greater role in the integration process by ensuring political stability and creating the legal environment conducive for the implementation of economic integration policies.

Consequently, they called for the review of the current legal regime in the Community to ensure the direct applicability of Community Texts in Member States while Community citizens should be empowered to enable them invoke Community Laws before national courts.

The participants, who are mainly academics, jurists, lawyers, Chief Justices of Member States, representatives of national Bar Associations and ECOWAS national offices, urged Member States to establish a peer review mechanism similar to that of the African Union to monitor compliance of Member States with their Community obligations.

Moreover, they stressed the need for Member States and the ECOWAS Commission  to take steps to harmonise the legal and judicial systems of the Community in accordance with the extant provision in the Revised Treaty so as to promote synergy between the ECOWAS and national courts. As part of this process, they suggested that the  national courts of the Member States should  be encouraged to make referrals to the regional court on Community Law and cite the judgments of the Court in their jurisprudence.

They noted that despite the supranational features of the Community through successive Treaty instructions, ECOWAS still runs on the intergovernmental model and recommended the strengthening of its supranational features by enhancing the powers of the Commission in addition to granting the Court jurisdiction to hear cases filed by individuals in respect of ECOWAS Laws.

Furthermore, they encouraged Member States, host communities and investors to explore the dispute resolution mechanism of the regional court in compliance with the ECOWAS Investment Code to enhance Foreign Direct Investment (FDI) into the 15-member Community.

In addition, the participants urged Member States to ensure the smooth implementation of the regional Investment Policy and Codes as a single economic legal framework to ensure the   promotion, facilitation, protection and sustainability of cross border investment.

Member States were also urged to support  the ECOWAS Business Council (EBC) in its desire to promote economic development and create jobs through capacity building of Small and Medium – Scale Enterprises (SMEs) as well as implement the ECOWAS Common Investment Code, which was adopted in December 2018 at the 54th Ordinary session of the Authority of Heads of State and Government of ECOWAS while the policy was adopted during 56th ordinary session of the Authority in 21st December 2019.

In order to address the pervasive poor knowledge of the Court and its work in the region, the participants urged the Court to undertake regionwide advocacy in collaboration with Civil Society Organisations (CSO’s) and relevant stakeholders in Member States as well as make its Protocols, Law Reports and Rules of Procedure to national judiciaries and bar associations.

Additionally, they urged the Court to engage municipal judges of Member States through regular judicial dialogue as well as encourage frequent interaction between the Bar Associations of Member States and the Academia for information and experience sharing on how to ensure the integration of Community Laws into the domestic legal system.

In order to deepen the involvement of citizens in the integration process, they called for wider participation in such conferences and the creation of breakout sessions for students, women groups and civil society. Member States were also encouraged to  include Community education; objectives, goals and norms of ECOWAS at all levels of schools’ curriculum to create a sense of Community identity while the Universities should also include Community studies and Community law in their curriculum.

Moreover, the Court was urged to sustain its training programmes for lawyers, judges and the academia in the Member States while the  remaining nine Member States that are yet to appoint their competent national authorities for the enforcement of the judgments of the Court were advised to do so without further delay.

The participants expressed concern at the reduction in the size and tenure of the judges of the Court because of its negative impact on its effectiveness and requested Heads of State and Government of the Community to restore the  composition and tenure of the judges in line with the provision of its 1991 Protocol by increasing their number to seven from the present five and their tenures from four years non renewable to five years renewable for another term of five years.

Among the other recommendations were that Member States should domesticate the Revised Treaty and Protocols on the Court and enact implementing legislation to facilitate the enforcement of judgments of the Court by national courts.

They also urged the Community to establish a mechanism for the effective implementation of the Protocol on Free Movement to ease the mobility of Community citizens and remove all barriers and obstacles. In addition, Member States should ensure compliance with the provisions of the Protocol on Free Movement and play their coordinating role including implementing the provisions regarding the right of residence and establishment while ensuring the removal of all discriminatory practices.

Moreover, they urged the States to recognize the ECOWAS National Biometric Identity Card (ENBIC) as a travel document in accordance with the Protocol and integrate into the ENBIC regime in order to facilitate the unfettered mobility of ECOWAS Citizens and enhance the security architecture of the Community. Member States that are yet to adopt the ENBIC are encouraged to do so as soon as possible.

In order to ease communication with immigration officials and aid the free movement of Community citizens between borders,  they urged Member States to ensure the training of immigration officials on basic communication in the three Community languages while advocacy and sensitization should be undertaken for Community citizens, Judges, critical stakeholders in ECOWAS Institutions and in Member States about the provisions of the ECOWAS Protocol on Free Movement and other key ECOWAS Community texts.

Finally, they urged the ECOWAS Commission to take necessary steps to trigger the sanctions mechanism in relation to Member States that fail to fulfil their Community obligations.

The conference, the first to be hosted by the Court in Cabo Verde, was held on the theme: ECOWAS Integration Model: the legal implications of regionalism, sovereignty and supranationalism

During the session, the 150 participants at the conference interrogated various dimensions of the ECOWAS integration project under seven sub themes.

In remarks at the opening, the President of the Court, Honorable Justice Edward Amoako Asante  had described the conference as a “historic opportunity to holistically  interrogate the Community’s 47 year effort to integrate the 15 Member States despite the language diversity as well as historic and development experiences.

“ It should be seen as the Court’s additional  contribution to the strengthening of the Community for greater efficiency and effectiveness in delivering on its mandate in the interest of the citizens as well as the development of Community Law,” he added.