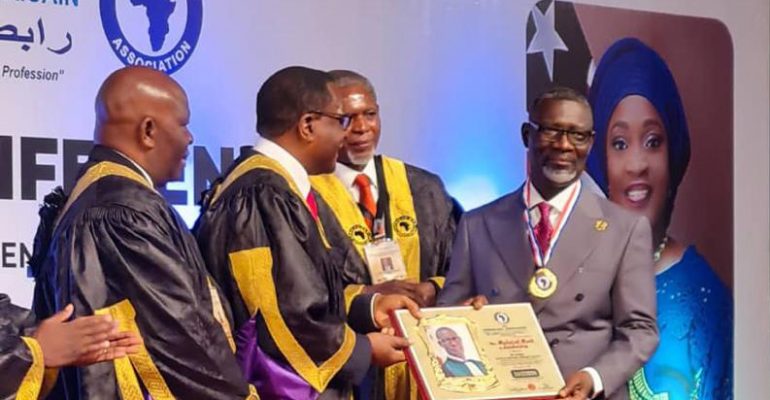 The President of the ECOWAS Court of Justice, Justice Edward Amoako Asante was today decorated with the African Bar Association (ABA) Medal of Merit in Leadership under whose outstanding leadership, the Court rendered landmark decisions.

The award was given during the opening ceremony of the 2022 annual conference of the ABA which opened on Monday, 8th August 2022 in Lilongwe, Republic of Malawi.

Several other eminent persons were decorated during the ceremony including the President of the Cairo-based AFREXIM Bank, Professor Benedict Oramah, former Presidents John Kufuor of Ghana and Pedro Pires of Cape Verde. Also honored were Liberia’s Vice President, Dr Jewel Howard Taylor, who was the keynote speaker at the conference as well as Dr Christopher Edordu, the pioneer President of AFREXIM Bank and Nigeria’s former Minister of Women Affairs.

In a message ahead of the award, the Court characterized the award as a recognition of the exemplary leadership provided by President Asante that has strengthened the image of the court as an exemplar among Africa’s regional courts.

“ Coming a few months after the Court received the Global Freedom of Expression award of the Colombia University in the United States, this award strengthens the image the Court under the President’s able leadership as an international court that inspires public confidence and trust,’’ the statement added.

In another message, the Director General of the Nigerian Institute of Advanced Legal Studies, Professor Muhammed Tawfiq Ladan said the award was evidently deserved and described the President as ‘an epitome of justice in its present form and a champion of human rights in the administration of justice.

A judge of the Appeals Court of the Republic of Ghana, Justice Asante was twice in 2018 and 2020 elected by his four other colleagues as President of the Court following their swearing in by the then Chairman of the Authority of Heads of State and Government of ECOWAS in 2018.

He and two others have been retained at the Court after the expiry of their initial four year tenure in July 2022 following a recent decision of the Authority of Heads of State and Government of the Community.

He has attended, facilitated and served as Resource Person at many international conferences, workshops, judicial dialogues and seminars organized by UNESCO,  the World Jurists Association,  the International Law Institute, the Internet governance forum, the African Court, the International Court of Justice and the International Criminal Court  mainly in the areas of Freedom of Expression on the Safety of Journalists, Arbitration, Artificial Intelligence, Rule of Law, Humanitarian Law and Human Rights.

Under his leadership, the ECOWAS Court successfully organized three international conferences on various aspects of the Court’s jurisprudence drawing from the expertise of leading jurists, lawyers, professional and scholars within the region to enrich the work of the Court.

In order to avert the devastating effects of the Covid-19 pandemic on the Court, the President drafted and implemented the 2020 Practice Direction on Electronic Case Management which enabled the Court to undertake virtual hearings. Since then, the Court has heard and delivered judgements in many cases through the use of virtual technology without parties and lawyers travelling to the seat of the Court with the attendant savings in costs aside the risk of infection.

Under his able leadership, the Court was in March this year awarded the ‘Global Freedom of Expression” prize in the best recognized decision category for its decision in a case by Amnesty International and six others against the Republic of Togo.

The Court has also delivered many landmark decisions that have attracted international accolades.