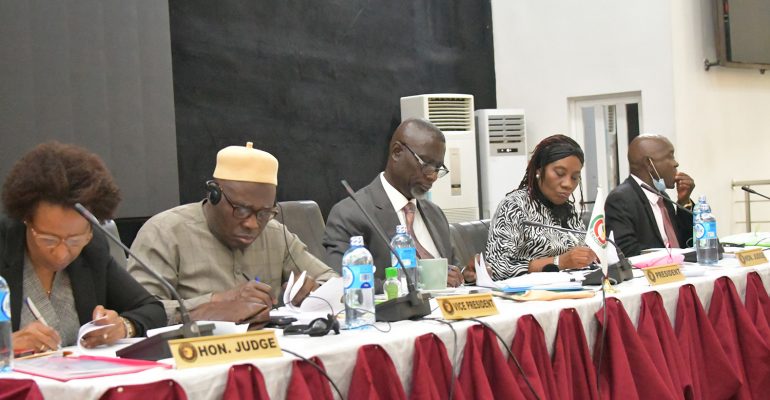 A weeklong judicial retreat of the ECOWAS Court of Justice has been formally opened at Global village near Abuja during which Judges and Staff will evaluate the Court’s electronic case management system (ECMS), which was introduced in 2020 following the outbreak of the Covid-19 to enable the e-filing of cases and virtual hearing of cases.

At the opening ceremony, the President of the Court, Justice Edward Amoako Asante said it was important to interrogate the implementation of the ECMS in order to identify the weak links that could be addressed in order to improve the effectiveness of the system which has also improved citizen access to the Court.

“It is our collective duty to deploy our best efforts to make sure we take a post review decision that will make the system more effective and impactful,” the President said in the remarks which was delivered on his behalf by the Chief Registrar of the Court, Mr. Tony Anene-Maidoh.

The President characterized the retreat as the ‘flagship judicial activity of the Court’ that enables the judges, staff of the Registry as well as those of research and documentation, among others, to discuss various issues germane to the Court and make proposals for improving on the efficiency of its judicial functions.

There will also be presentations and discussions on the recording and transcription of proceedings, judgements and judgement applications, publications, image of the court and visibility of judicial activities as well as the activities of the archives unit of the Court.