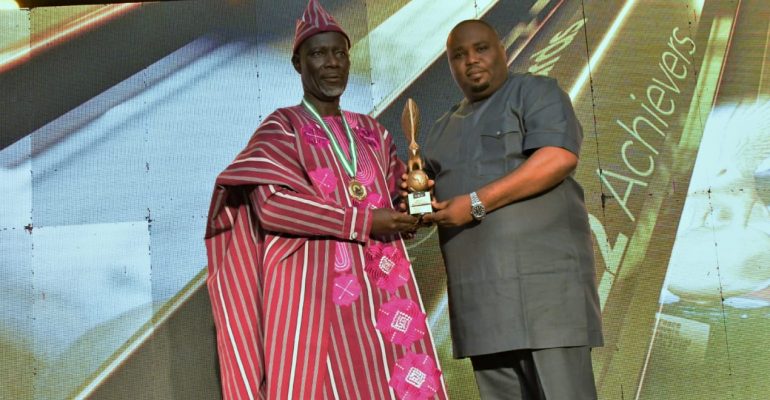 The President of the ECOWAS Court of Justice, Justice Edward Amoako Asante was on Saturday, 15th of October 2022 in Abuja, decorated with an award for excellence in leadership, peace and community development for his ‘groundbreaking  commitment to human capital development and support for projects in empowering young leaders in Africa.”

The award is in the distinguished personality category.

The President was among the 30 awardees at the 11th edition of the annual ceremony organized by the Executive Council of Peace Ambassadors Agency Worldwide and its partnering institution,  the US based American Management University which was on the theme “The Role of the Nigerian Youth, Community Leaders, the Media and Security in Nigeria’s 2023 Elections.”

The ceremony is an annual event for recognizing individuals and organizations in Nigeria and Africa that have shown a strong commitment to serving their community while maintaining a global mindset.

He has facilitated and served as a resource person at many international conferences, workshops, judicial dialogues and seminars organized by UNESCO, the World Jurists Association, the International Law Institute, the Internet Governance Forum, the African Court, the International Court of Justice, and the International Criminal Court, in the areas of freedom of expression and the safety of journalists, arbitration, artificial intelligence, rule of law, humanitarian laws and human rights generally etc.

Under his leadership, the ECOWAS Court has successfully organized three international conferences on various aspects of the court’s jurisprudence drawing on the experiences of leading jurists, lawyers, professionals and scholars within the region, to enrich the work of the court.

In order to avert the devastating effects of the covid-19 pandemic on the administration of justice, he ensured that the Court adopted the 2020 Practice Direction on Electronic Case Management and Virtual Court Sessions, which enabled the Court to commence electronic filing and virtual court sessions. Since then, many cases have been heard and judgments consequently delivered without parties and lawyers travelling to the seat of the court, thus saving indigent parties and their lawyers the travelling and hotel costs, aside the risk of infections.

In March this year, under his able leadership, the court was selected by the Columbia University in New York and awarded the “Best Recognized Judicial Decision category” in the Global Freedom of Expression Award for the year 2020. This award was given based on the Court’s decision in a case titled, Amnesty International & 6 others vs. Republic of Togo. During his tenure, the Court has delivered many landmark decisions of international standards that have received international accolade.