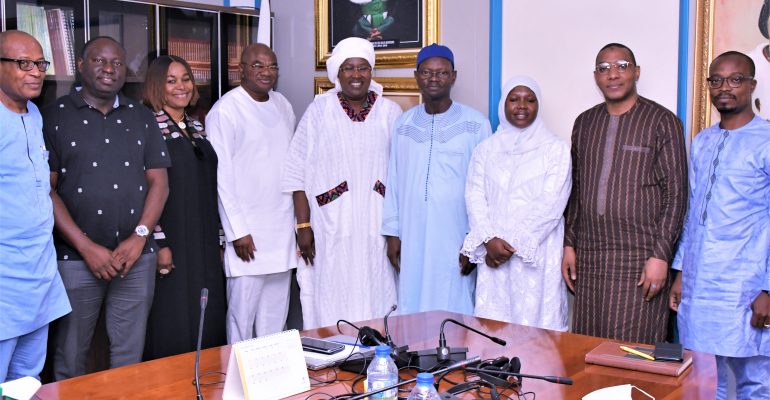 The ECOWAS Court is working on a programme through which it will engage Member States to improve on the level of ratification of the three regional instruments on the Court and contribute to improving the enforcement of its decisions by the States, the Chief Registrar of the Court, Dr. Yaouza Ouro-Sama has said.

During a meeting with a delegation from the Dakar-based ECOWAS Gender Development Centre in Abuja on Friday, 11th November 2022 the Chief Registrar expressed concern at the ‘appalling’ level of ratification of these instruments, the only exception being the 1991 founding Protocol which has been ratified by all the Member States except Cape Verde and Guinea Bissau.

Some States have been relying on their non-ratification of these Protocols as a basis for the non-enforcement of the decisions of the Court.

He said that the intention of the programme is to work with the relevant Member States to ensure that at least three of such States ratify the Protocols outstanding against them each year and also expressed concern at the “poor” level of awareness of the Community’s Supplementary Act on gender equality among its agencies.

He announced the appointment of Mrs. Frances Ibanga of the Registry as the Court’s focal point for a forthcoming UNDP funded project on gender equality being managed by the Centre and pledged the commitment of the Court to work with the Centre in developing an inventory of its decisions that will contribute to the realization of the project.

“ We encourage you to avail yourself of the resources of the court and its jurisprudence particularly in the areas of women’s rights and human rights protection,” he said, urging the Centre to revive a gender training programme for judges  and staff of the Court which was last held in 2008 and found beneficial.

The spokesperson for the Centre’s delegation, Mr Awudu Ahmed Gumah said the visit was to secure the cooperation of the Court  in the project designed to advance gender equality and women empowerment within the ECOWAS Commission as well as institutions and agencies of the Community.

Mr. Gumah, who is the Head of Planning, Research, Monitoring and Evaluation of the Centre said the project has seven components related to the various identified issues towards the promotion of gender equality while acknowledging that the Community has made some progress in addressing the issue of gender equality.

The Court’s delegation included the Director of Research and Documentation, Dr. Ousman Diallo, the Head of Communication, Mr. Sunday Ugoh, the Registrar in charge of Judicial Records, Archives and Publications, Madam Marie Saine and a Research Officer, Mr. Ghislain Agbozo, as well as Mrs. Ibanga of the Registry.

Also on the delegation of the Centre were Madam Salimata Thiam, a Principal Programme Officer and Mr. Peter Mokwe, the UNDP Regional Gender Support Specialist.