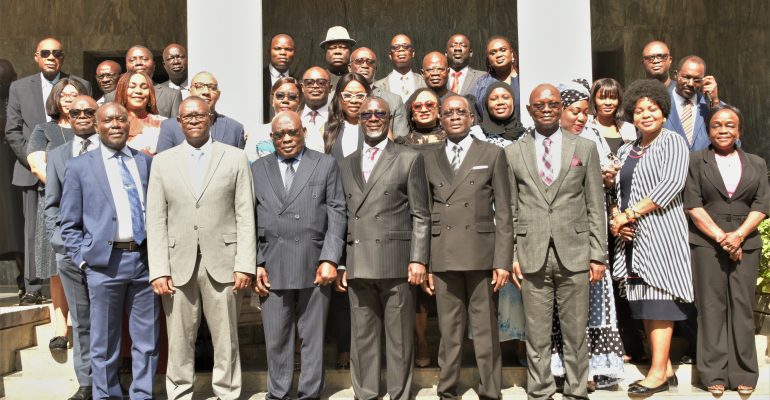 The President   of the Community Court of Justice, ECOWAS, Justice Edward Amoako Asante, has challenged newly recruited judges and staff to quickly familiarize themselves with the people, relevant documentation on the Court and its procedures that will contribute to the effective discharge of their responsibilities.

Speaking at the opening of an induction training for the new judges and staff on Monday, 21st November 2022, the President described the exercise as part of the process of integrating them into “our processes and procedures while familiarizing them with our structures and interventions.

“In the evolution of organisations, there are periods of rejuvenation through the infusion of new energy which your recruitment represents. Such injection presents an opportunity for organisations to marry the experience of the old with the energy and enthusiasm of the new,” the President said.

He expressed the hope that the diverse perspectives that the new judges will bring from their national jurisdictions will enrich its “enviable jurisprudence that enjoys the adulation of other international courts and which has earned us international recognition and awards.”

Justice Asante praised the preceding college of judges for sustaining the Court’s tradition with the ‘courage and independence of their decisions’ and for distinguishing themselves during their tenure with the delivery of a “historic 47 judgements by their last sitting in July 2022, the highest in the history of the Court and comparable to the number for 2021.

“You have therefore come into a rich heritage of distinction in terms of the number and jurisprudence of the Court which hopefully will be strengthened during your tenure, and we hope that the momentum already generated and which was responsible for these landmark achievements will be improved during your tenure,’ he stressed.

He noted that the assumption of duty of the new staff, judges and their Executive Assistants, coincides with a period of momentous developments in the court exemplified by the impending relocation to the new building in the Gudu district of Abuja; the introduction of the Electronic Case Management System (ECMS) that will enhance the management of cases through the infusion of technology into the case management system for greater efficiency and access and the ongoing recruitment of staff to address some of the capacity gaps confronting the court.

Consequently, he said that the Court’s management is working to progressively fill all the vacancies in its approved organogram with 22 of the vacancies already advertised as part of the process of ensuring that the Court is equipped with the requisite staff to function optimally.

He assured the staff that their interest will be protected during the recruitment exercise which will be based on the relevant texts for the exercise and the decisions of the Community’s Council of Ministers.

Presentations during the five day programme will focus on an overview of the Court, its basic texts, mandate/jurisprudence, the ECMS, the practice and procedures and relevant administrative financial issues as well as presentations on some of the critical programmes of the Court and the status of pending cases.

The former Chief Registrar of the Court, Mr Tony Anene-Maidoh, who is facilitating the induction, said the programme will help provide them with concise and accurate information on the Court to enhance their work.