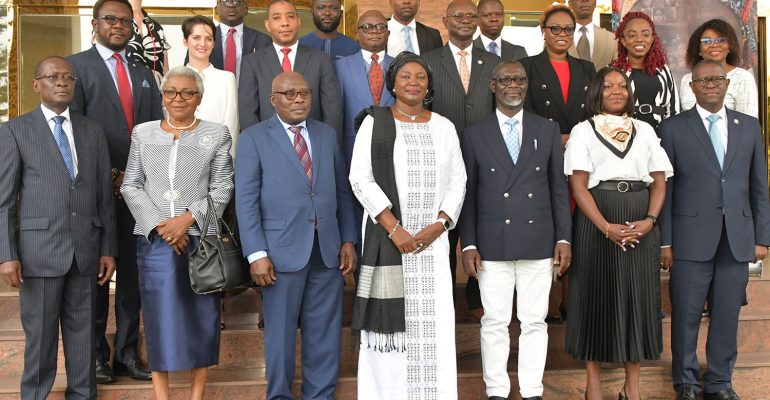 The President of ECOWAS Court, Justice Edward Amoako Asante has hailed as ‘very useful for the exercise of the jurisprudence of the Court’, the just concluded two-day Judicial colloquium organised by the Center for Human Rights of the University of Pretoria on the Maputo Protocol.

«The discussions we had on the interpretation of the Maputo Protocol in the award of damages for the violation of the rights of women not only reflects the intendment of the Protocol but will be gender sensitive and strenghten the Court’s jurisprudence, the President said in closing remarks at the end of the colloquium on Wednesday, 30th November 2022.

He praised the University for hosting the « fruitful and educative » colloquium, the first of such discussion platform organised by the institution which was designed to ensure that the pronouncements of the Court and the Commission on the Protocol are in line with the spirit, purpose and objectives of the African Charter on Human and Peoples’ Rights.

In her closing remarks, the Special Rapporteur on the Rights of Women in Africa of the African Commission, Commissioner Janet Sallah-Njie, commended the Center for Human Rights of the University, the organisers of the forum for guiding the colloquium towards the attainment of the intended objective.

She described the forum as important for the protection and defense of human rights, particularly the rights of women in Africa and urged the beneficiary institutions to deploy the benefits of the colloquium in the implementation of the Protocol for the benefit of its target.

Article 2 (2) of the Maputo Protocol supplements the equality clause in the African Charter which under Article 2 guarantees gender equality by recognising an entitlement to the employment of the rights and freedoms guaranteed in the Charter.

The colloquium was presented in two panel discussions and involved five Commissioners of the African Commission on Human and Peoples’ Rights, five judges of the Court and four other staff. It was held on the four sub – themes of The Maputo Protocol as an instrument of change for African women: Introduction and substantive provisions; Substance of the right to equality in the Maputo Protocol: formal and substantive equality; Adjudicating cases claiming entitlement to equality: Perspectives from comparative jurisprudence and Intersectionality and litigating equality claims before regional bodies.

The colloquium was designed to sensitise judicial and quasi-judicial officers of substantive equality principles required for a gender-sensitive approach to the application of the Maputo Protocol;  facilitate cross-learning between the African Commission on Human and Peoples’ Rights and the ECOWAS Community Court of Justice as regional and sub-regional judicial and quasi-judicial bodies in Africa; facilitate cross-learning between judicial officers involved in adjudicating equality in domestic and international jurisdictions and provide recent research material to influence a gender-sensitive application of the Maputo Protocol.