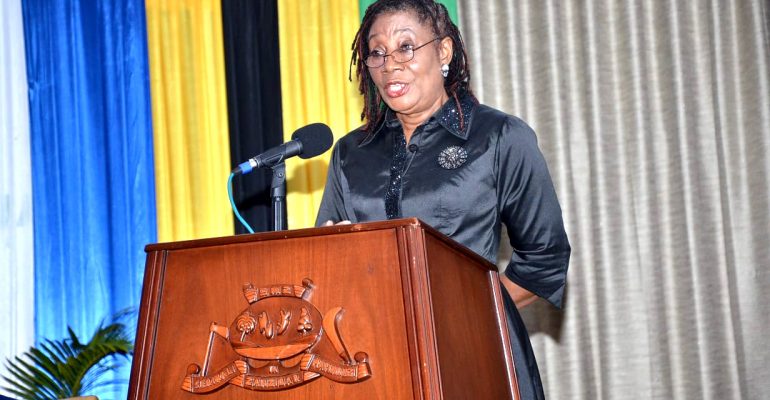 A judge of the ECOWAS Court of Justice has called for the institutionalization of the tripartite judicial dialogue of three of Africa’s key regional  and sub regional courts in order to provide a platform for the discussion of issues of common interests regarding the protection of human rights.

At the opening of the inaugural tripartite judicial dialogue of the East African Court, the ECOWAS Community Court of Justice and the African Court on Human and Peoples’ Rights on Monday, 27th June 2022 in Zanzibar, Justice Dupe Atoki said that the dialogue will provide an opportunity for regular interaction and exchange of ideas among the judges of these courts.

Moreover, she noted that the three courts interpret and apply the African Charter on Human and Peoples’ Rights and acknowledged the role of partner organizations, as part of their mandate, to ensure the promotion and protection of human rights.

Justice Atoki, who led the four member ECOWAS Court delegation to the dialogue, praised the forum as “laudable” and expressed the hope that the outcome would be beneficial to judges of the Courts’ and partner organisations.

She also spoke on the evolution of the Court from an interstate court at inception with the sole responsibility for the interpretation of Community texts to a court with four mandates. She noted that its human rights mandate, which it was granted in 2005 as part of  the expansion of its mandate, has become the epicenter of its judicial activities and around which its jurisprudence has flourished.

Justice added: “We are proud of the work of the ECOWAS Court in protecting the civil liberties of ECOWAS Community citizens and other nationals in the territory of ECOWAS Member States, as evidenced from its robust jurisprudence

“In this wise we are glad that the Court has gained international recognition for its work in the protection of human rights,’ she said, recalling that the court was in March  this year awarded  the global Freedom of Expression prize by Columbia University based on its 2021 decision in the case of Amnesty International, Togo against the Republic of Togo.

“Today, we can proudly say, that the ECOWAS Court of Justice is a pace setter amongst its peers in Africa, ‘ she emphasized.

She noted that a key distinctive element of the procedure of the Court compared to similar international human rights courts, is  the requirement for the non- exhaustion of local remedies before approaching the Court. Such applications, she added, should not be anonymous nor made whilst the same matter has been instituted before another International Court for adjudication.

Also on the Court delegation to the dialogue are Honorable Justices Keikura Bangura, Januaria Costa as well as the Chief Registrar, Mr. Tony Anene-Maidoh.

The three day dialogue is being facilitated by the Swedish-based Raoul Wallenberg Institute of Human Rights and Humanitarian Law.